Who is Moshe Feldenkrais 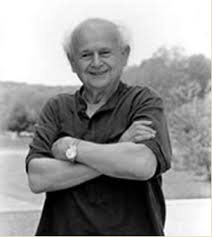 THE FELDENKRAIS METHOD® is named after the distinguished scientist and educator Moshe Feldenkrais, Israeli, Physicist, judo expert, mechanical engineer and educator (1904-1984). Dr. Feldenkrais studied intensively in psychology, neuron physiology, child development, and other health related disciplines. He earned his doctorate in physics at the Sorbonne in Paris and later was an associate to the Nobel Prize laureate Frederic Joliot-Curie. He was also the first European to earn a black belt in judo and is credited with introducing the sport to the West. After suffering crippling knee injuries and wanting to avoid surgery, he turned his attention to his own movement, leading him to walk in a way that didn’t aggravate his damaged knees. He embarked on exploring new relationships between the mind and body to improve physical movement and function, developing his system for accessing the intelligence of the central nervous system. During a period of 40 years Feldenkrais developed his system, an ingenious method for effective neuromuscular reeducation. He shared this special knowledge among a select group of students worldwide.

Moshe Feldenkrais created a method of mental and physical training that has made significant contributions to the fields of psychology, rehabilitation, medicine, sports and performance training, education, and special education. Feldenkrais’ method was a synthesis of ideas and approaches from many sources, stemming from his rich life experiences.

He lived through social upheavals and knew some of most influential intellectuals, artists, businessmen, and statesmen of the 20th century. He led a fascinating life from his birth in Eastern Europe, through periods where he lived in Palestine, France, Scotland, England, Israel and the United States.